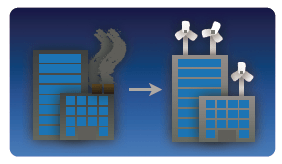 Shareholder resolutions targeting greenhouse gas emissions, spearheaded by MIT alum Christine Jantz’s responsible investment firm Jantz Management, are calling on technology giant Apple and heavy equipment manufacturer Deere & Co. to commit to a goal of net zero carbon emissions by 2030. As a manufacturer with a supply chain that is entirely within the US, Jantz believes that John Deere is capable of exerting the influence necessary to achieve net zero emissions on all of its suppliers. Apple, meanwhile, is publicly committed to reducing its emissions; however, the company’s current goals ignore the contribution of its international suppliers to the total carbon footprint of its products.

Both Apple and Deere, who are known in their industries for being environmentally conscious, have advised their shareholders to reject the resolutions. Jantz responded to Apple, pointing out that over 80% of the carbon emissions created by their activities are not addressed by their current plans. Deere currently has a modest target of reducing their emissions 15% from 2012-2018. Jantz is urging them to take leadership by strengthening this goal. Shareholders will vote on these resolutions in late February.

Jantz’s action is part of a growing movement to urge companies, especially those involved in manufacturing, to curb the emissions of their diverse business activities. For example, Walmart committed to improving the energy efficiency of 200 supplier factories in China and HP plans to reduce the emissions of their first-tier suppliers by 20%. According to Business for Social Responsibility, a global non-profit organization, “These companies understand that relatively modest changes to their business practices could motivate suppliers to reduce emissions substantially.”

Ceres, a coalition of investor-advocates working to pressure companies to improve their greenhouse gas footprints, has mobilized numerous shareholder resolutions at firms ranging from Amazon to Xcel Energy. In some cases–such as a 2011 resolution calling for Peabody Energy (a major coal producer) to produce a report explaining how the company plans to deal with increasing regulatory and public pressure to limit greenhouse gas emissions–a resolution is withdrawn because the company agrees to its terms  before shareholders get a chance to vote on it. Such resolutions target various aspects of carbon emissions; however, Jantz believes that focusing on a goal of net zero emissions within 15 years is the top priority.

Jantz became personally involved in the world of corporate accountability and sustainable investment when she joined forces with Everence, a faith-based socially responsible investment firm affiliated with her alma mater, Bethel College in Kansas. Together with other firms, Jantz Management began to develop investment products focused on environmental and social governance. In the past year, Jantz has become keenly aware that the movement towards more sustainable business practices isn’t happening fast enough, and is expanding her actions by working with the Climate Action Business Association and here at MITACAL! We are thrilled to be able to share in her deep knowledge of the investment world and passion for urging institutions to do the right thing!